It was the end of a long day when I remembered that I had gotten an email from someone whose cat was in the crawl space of their house and wouldn’t come out. I had emailed her earlier in the day saying I would get back to her when I finished work. 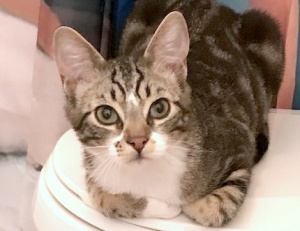 In truth, I sort of dreaded making the call because it sounded so dire as the cat had spent two nights there without any food and day three was fast approaching which would be highly dangerous to his health. That’s a lot of pressure and I wanted to make sure she was utilizing ALL options, so I had given her some rescue organizations to contact.

She had called one of the two I had suggested early in the day, the San Diego Humane Society, but she said they were not only unhelpful and unsympathetic, they were, indeed, rather nasty and rude to her both times she called. She was looking into Rancho Coastal (don’t know what happened with that). I suggested that while she was waiting for me to call her to do an emergency session after I ate dinner, that she contact Hope For Paws in L.A. They are experts and retrieving animals from tight spaces and that cat had to come out tonight. Another night without food and his organs could start to shut down.

I finished dinner and in a combination of extraordinary exhaustion from a long day, and the dread of doing a pressure-packed, life-threatening emergency session, I got up from the table and announced I was off to do my session. “I hope I can get that cat out, “ I said to my husband, then quickly revised my statement to say, “I’m going to get that cat out tonight.”  “How long are you going to be?” He asked. “Well, it’s supposed to be a half-hour session. We’ll see.”

Off I went. When I connected to Nibbler’s mom, I don’t know why it didn’t occur to me, but she was outside near the crawl space with her husband. I was glad of that, we could work as a team.

For most of the two days, for the most part, they had eyes on Nibbler. He would come ever so close to the crawl space opening but just wouldn’t come out. Not for food, not when they called. They couldn’t figure it out.

Seeing as how I had never spoken to Nibbler before, I needed to get some evidence and make sure that anything that he was upset about in the household would change when he came in. We went through a few things that seemed obvious to mom when I brought them up, but those things that she just didn’t think about until she heard them her cat.

I assured Nibbler that his requests would be honored. Then we started the real work. In asking Nibbler why he wouldn’t come out he showed me an image of very sharp wires facing towards him that he seemed to be afraid to walk past. In asking for validation, mom said yes there was somewhat of a wire grate there, among a lot of debris.

I asked if they could not bend that wire away to make a clear pathway for Nibbler through which he would be comfortable going through. They said the wire was fairly thick, but dad went to get some wire cutters as I continued to speak with Nibbler. 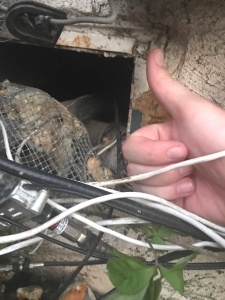 As dad was cutting the wire, Nibbler retreated to where he could not be seen. I consistently reassured him of what was happening and why. This was to create a safe place for him to exit this environment. He was starting to get a bit sad but was doing well overall. He wasn’t terrified or feeling panicky as if he were trapped, but it did appear he was hungry and starting to get quite concerned.

As dad worked on the wire, mom passed the phone over to him so I could talk to him about the size of the opening. He actually sent me a text which showed one hole he had opened up on one side. The other side of the crawlspace opening, he explained, was outfitted with a humane trap and some chicken wire so that if he went through that hole he couldn’t go elsewhere (as if in case he came out when they were not there physically.)

I did feel some hesitation about this trap from him but certainly could not deny it had to be there. They seemed to be doing everything right. Dad then went on to tell me that he had gotten as much of the wire off and pulled back as smoothly as possible, as I had asked them to do, and that he wanted to go inside to get a stronger flashlight with which to see Nibbler.

I said to him, “That’s fine. We are running out of daylight and I want to do some things with him. I won’t take the time to explain them to you, i just need to do it so do what you need to so so we don’t run out of time.”

My concern was, and I told them, that if he didn’t come out while they were still there, if he needed to have them not there to come out, I wanted them to get set up whatever they needed to set up before dark. But, in my heart, I was more thinking, “I want to get him out of there before dark, I don’t want him to spend another night in there.”

What my plan was that I didn’t explain to them was that I wanted to “Grok” him to help guide him out. I figured it was worth a shot. Grokking is when I merge my energy with the animal, let them feel my energy, look through their eyes and, in this case, try to inspire him to go out on his own before they covered up the second hole if they weren’t going to be there. (IOW, there were two holes. One went into the trap. The other went straight out but if they were not going to be out there for however long, they would cover up that hole to make sure that he would only go into the trap and not be able to go elsewhere outside. For the record, Nibbler is an indoor cat who got startled and scratched a hole through the screen door to get out.) I also asked one of my cats in spirit, Cairo, to come and help as well.

So, Dad is running in to get a flashlight, mom is now just starting to man the phone after the handoff, I, in the meantime, am grokking Nibbler as I’m waiting for her to get back on the phone.

At first, I was showing him the hole going into the trap. This just did not feel like it was sitting very well with him. So I said to him, “Okay. That’s okay. Would you like to go over to this hole over here?” I walked him over, visualizing the hole from the inside, consistently trying to both influence him to walk through it, and explaining that if he did, he would be greeted with the biggest, warmest hug from mom, he would get good food and would be able to sleep in bed with them tonight. Meanwhile, mom got back on the phone and I asked her to hold on (so I could focus on the grok).

I was gobsmacked that within no more than 30 seconds or so from the moment I started guiding him to the second hole, I heard over the phone, “Oh My God! He’s coming out! Wait! Wait! Don’t scare him. (She was talking to her husband.) “Let him come out on his own!” I continued to inspire him, egging him on, “Good boy! You can do it! You can do it!” A few more moments passed and I heard mom let out with absolute sobs of happiness. “Do you have him???” “Do you have him???” I asked! I could barely hear a yes through the sobs and the apologies for crying, but my heart soared when she finally said, “Yes. My husband has him. He just jumped into his arms!” I said to her, “Okay! I said he’d get his first hugs from you, but I’ll take that!”

She continued to sob and apologize and I told her, “Don’t apologize, I’m crying too!” She went on to expel three days of relief saying she hadn’t slept because she was spending every night outside hoping he would come out, doing everything to get him to come out and she was just so exhausted. I’ve never heard such relief in anyone’s voice, and I’ve never felt so good a the end of a session. Mom just kept thanking me profusely but was beside herself. I told her, “Go in. Be with your baby. Give him hugs and kisses for me. 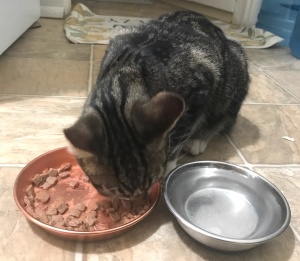 I don’t doubt that what I do is real but rarely do I get validation on the spot and less frequently am I working with such an immediate life and death situation. I will tell you, though, I have never felt so good getting off a call in my life, (let alone one that went nearly three times as long as scheduled). Best hour and 20 min. I’ve ever spent.

Shortly after I came back out to my routine life I got a text from Nibbler’s mom saying “You will forever be a guardian angel in our lives. Thank you for bringing our baby home. He gave me an actual hug” along with a photo of him eating.

I’ve always said, after I lost my music career to a career-ending back & neck injury, that instead of the applause I was used to, I now get applause one pair of paws at a time. It’s not big, it’s not showy but the feeling of saving a tiny little 8 month-old life is pretty cool. Nibbler will forever hold a special place in my heart.