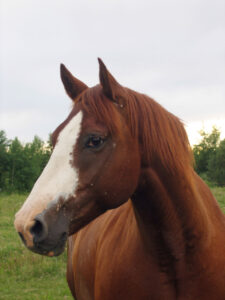 I rarely post my communications, but what follows is a portion of a reading I did with a rescue organization I work with. We were speaking to two horses, both named Lava Lady. One who was a racehorse in the early part of the 20th century, and one, a pregnant racehorse who currently resides in Florida.

The latter is for sale for $10,000 including her future baby. For the sake of simplicity, we have combined the words of both horses into one. However, the main communicator was the Lava Lady who was in spirit. She was acting as a guide and caretaker for the horse who is still in body, who is highly distraught at the thought of her baby becoming a racehorse. She wants to be adopted by a loving family. The message, however, became bigger than I could even imagine.

********
Lisa: She is showing me her environment and this place looks freakin’ huge! She’s saying the people are nice enough, but there’s no emotional connection whatsoever. It’s almost as though she knows what an emotional connection with a person is, but she doesn’t really have it.  She knows what that connection is because somebody maybe at some point took care of her that way.  The connection that we understand a connection to be is just not there. She does not want to be a broodmare; she does not want her baby to be a racehorse.

Lava Lady: You (were contacted) were the only hope.

Lisa: … if there can be something done, and she understands that there may not be able to be, but if there could be, she feels that you, given your spiritual understanding of things, might be able to find a place for these horses.

Lisa: She says that this is a time in your spiritual evolution, where you bring to light to a wider audience of people, the lives of racehorses, and the kind of lives that racehorses have. People look at them and they get taken care of, and have nice shiny coats and all of that, and they live in nice clean stalls, they think their lives are really nice.  She says “we are nothing but slaves. It’s time that the world awakens to that.”   She’s saying that there is validity to the whole 2012 Mayan Calendar thing, in that there can be a change in consciousness if, number one: people are willing to listen and, number two: there are enough people willing to speak.

Lisa: Racehorses have a unique difficulty because they are “owned” by rich people.  That goes back to how they look from the outside as though they are very well taken care of, but they’re not loved.  Not like we think of love.

Lava Lady: … For horses as a species to survive and thrive, we need to be heard.  Think of where we came from.  (She’s showing a picture of horses out in the wild.)  Basically this doesn’t exist in this space continuum anymore.

Lava Lady: We contacted you because you are a friend of the horse. You understand us like no other.  It’s a very dismal time for so many of us because we live in such big bodies, even those who do understand and love us, it’s just different than the domestic animals you have, where you sleep with your pets, etc.

Lava Lady: There are a few who are very lucky but relatively few.  If those who were not guided by money could share their love with us things would be far different.

Lava Lady: I fear for the species. Breeding, as it is done, is breeding out the beauty of us all, the beauty of our true nature, the wildness of our true nature.  We can be Zen Horsie, as you would call it.  But so much of our lives are constricted.  And if you can help us you can help many.  (The spiritual aspect to this is if she could find the right home, she has a lot she could teach.)

Lisa: You would be a good person to do racehorse rescue.  There’s a need for it.  Racehorses have such a unique problem when they are rescued, that most of these other places (other rescues) while they are very compassionate, and are very loving, they don’t have the access for understanding, or ability, or consciousness, of connecting and communicating with them, in a way that is really necessary at this point in time to stop this.

Lisa: She is concerned that racing is huge part of what is damaging her species. The breeding and what they do to racehorses, is taking away their very nature.  It’s making them something else, to the point where these broodmares have babies and their babies don’t even know how to be real horses in the true sense of the word.  In true soul sense of the word, because they’ve had it bred out of them.

Lisa: But she hasn’t had that happen to her yet.  She’s held on with a thread to her ancestral ties, to her nature. They breed the nature out of theses horses to the point that they are nothing but robots.  Then they get thrown away and they don’t even know what to be.  They don’t even know how to reconnect ancestrally.

Lisa: And it’s very nice that these racehorse rescues take care of them and everything else, but they aren’t moving that step further. They’re not going to the step further which helps these racehorses come back into the fold of who they really are.

No matter how damaged they are … they can still be damaged, and still be touching who they are … but they never quite get there (in some other racehorse rescues) because they don’t do what you do.

Lisa: Rescuing horses isn’t just about the starving, the abandoned, etc.  There is emotional rescue as well.  She (Lava Lady) is not hurting, she’s not being abused, she’s well fed, she’s well brushed, she’s well taken care of, and she say’s that in part is the problem.  Because people look at her from the outside and say, “oh my God this horse has a wonderful life,” but here this SOUL is hanging on by a thread to the true nature of what she is.  She wants an emotional connection. She wants love and she wants to feel SOMETHING!  Racehorses don’t feel anything.

Lisa: And for some reason, it is so much more difficult for humans to understand horses than it is for them to understand dogs or cats because they live with them. Horses live someplace else, they (their people) see them at a separate time, and it’s not the same.  They don’t seem to understand horses from the same point of view they understand their other domestic animals. (she shows a close up picture of a horse’s eye).

Lisa: There is an inherent sadness creeping it’s way into the horse species (she shows a graphic like we’ve seen in the movies of the enemy spreading across Europe.) It’s like a wave of disconnection from self that is becoming an epidemic in horses as a species.

Lava Lady: I am afraid that what the heart and soul of a horse IS, will cease to exist. First on an emotional level, and then on a physical level.

Lisa: She knows you will do everything you can, everything that is possible, and she is now giving it up to the universe.  You can’t do anything without first being aware of the situation.

~ For more information about speaking to your own animals, please visit my site: Pawstalk Animal Communication & Reiki

THE OWL WHISPERER You will not find a better book…