Symbolic meanings for the owl are: 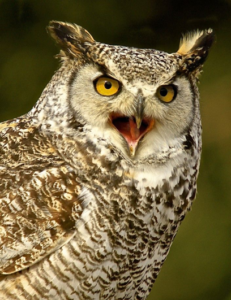 The owl’s large eyes are amongst the keenest in the animal kingdom.  The cones and rods of their eyes filter in only a small amount of light gifting them with excellent night vision thus enabling them to see their prey in the pitch darkness. Owls are not able to differentiate colors, but this is not a hindrance to owls as they rely more so on movement.

One of the most distinguishing features of the great horned owl is its tufts of feathers that resemble ears or “horns” – thus earning them their namesake. The asymmetrical openings in their eyes are attributed to their very sensitive and accurate hearing.

Owls live within the darkness, best associated with magic, mystery, and ancient knowledge.  Related to the night is the moon, which owls are also connected to as well as a symbol of the feminine and fertility, with the moon’s cycles of renewal.

Worldwide in various cultures, owls are the subject of many myths, legends and superstitions, most of which are related with death.  For example, the owl was recognized as a harbinger of death in America and Europe.  This belief originated from certain cultures, like the Dakota, and some Germanic tribes and Scandinavian Vikings, imitating the owl’s hoot, recognized as the easiest to imitate, to signal the approach of an attack.  Despite this bad rap, owls continue to be a revered source of wisdom, spiritual and intellectual.

Call on owl energy when:

Owl medicine teaches us to:

Perceptions of Spirituality “To ride on a broomstick and fly:…

ASK CAAT Question: “I find that I have fears of…

Question: Sometimes I get confused when I talk to my…