This week, my husband and I are on vacation. We went away and had a wonderful time in Julian and are taking a few days for ourselves here. Yesterday, we went to the library and had a lot of fun looking up the genealogy of my family. My grandmother’s name was Sadie. We spent the better part of the day doing that. 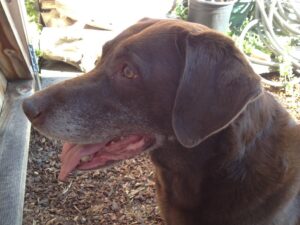 Today we did some shopping, came home to settle in for dinner with the cats, when out of the blue, an adorable chocolate lab, probably 80-100 lbs, with a greying muzzle, showed up at our screen door. Let’s be clear. This was not an animal who was investigating, looking here, looking there, this was a dog that came right up to our door and stood there as if to say, “I’m here.”

The sweetest dog you can imagine, she followed me into the back yard as my husband frantically worked to get the cats into the bedroom so they wouldn’t see him, as that would not have been the road to harmony in our cat-driven household.

This beautiful and muscular dog, was as calm and compliant as any dog I have ever encountered. Once we corralled the cats and set down some water for her, her being secured in the back yard, we ventured out into the neighborhood for the first order of business, to borrow a leash and collar. The neighbors across the street were happy to oblige.

It was a quarter to five, we had just enough time to rush her to the vets to see if she was chipped. As if she knew us and had done it a million times before, she jumped into the back seat of the truck, laying down to brace herself with every turn, like a pro. On the way, we tried to call Rancho Coastal Humane Society, 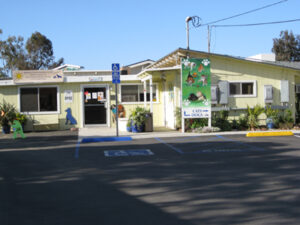 a non-kill shelter I used to volunteer at doing Reiki. We kept asking Siri to find it, but she couldn’t understand us. I resolved to ask the vets to call them immediately to ask them to stay open, pending our findings, but upon walking in, they scooted us into an air conditioned room (I’m sure the dog loved this on this 95 degree day) and I completely forgot. I was just glad to be there as the vet tech went out to get the chip scanner.

We were elated to hear they found an Avid chip, but that elation quickly changed to sigh, when we discovered that the chip had never been properly registered. They did find the name of the vet’s office who inserted the chip and called, but they stopped using Avid roughly 5 years ago and had no record of the dog’s person or people. We only knew the vet’s office was a good, 40-50 miles away.

It now was five minutes after five o’clock. The Rancho Coastal was now closed. The vet techs suggested the county animal shelter, which was open until 5:30pm but, for us, that is not an option. Before we left, the vet techs graciously gave us some dog food, but we were in a bind. One of our cats could have dealt with having a dog in the back yard, but the other one, not so much. He has severe PTSD from years of construction work on the house, preceded by several traumatic moves, and traumatic hospitalizations. This was not going to fly.

And it didn’t. When we got home, both cats were upset, not only from being locked up .. for the second time this day .. in a very hot house, but my PTSD baby, Makana, 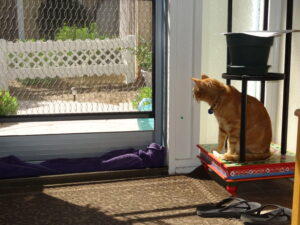 was beside himself. He knew something was going on, he just didn’t know what. We were getting home just around their dinnertime.

While I frantically made calls to lab rescue organizations (one which was closed, the other refused to help) and anyone I knew who might know someone who could take a dog for the night, my husband went out and fed our new found friend. He then rushed in to feed the cats, so that we could take her on a walk, hoping she could show us where she lived.

I’m not sure why I felt we needed to turn left out of the driveway, but I did, and so did she. As we ventured off, I asked my spirit guides to help us find her people. We went up and down talking to people, asking if they knew her. Some very helpful, some complacent. One couple was very interested and helpful, pointing out houses where they knew there were dogs. The interesting thing is, this information was salient in our directional decision-making.

We went to the first place, a woman named Jenn was very concerned, but didn’t know the dog. So we turned around and went the other way towards the other house we had heard there were dogs. Both my husband and I had the feeling that the dog was from around the neighborhood and hadn’t been out very long. She was clearly well taken care of, and you could tell she had recently had on a collar. As we did an about face, Michael said that he felt we should be turning to the right of our house. I said fine, but we should go across the street and around the corner first for this lead on the ‘house with lots of dogs’, thinking that they would know more dogs in the neighborhood.

As the dog ‘walked my husband’ on one side of the street, I went door to door several houses, and was subsequently pointed elsewhere. I met one woman, Jane, also very concerned who said she would have taken her for the weekend, but was already pet sitting another animal.

As I crossed back across the street, where Michael was waiting with the pup on the corner, I said, “Let’s go down this street and circle back around.” My thinking was we would hit the direction my husband wanted to go on the backside. (I came to find out he didn’t really understand my thinking because his thought was “Why would we go down *this* street?)

We tried another house, to no avail. Our anxiety rose, knowing how difficult it would be for us to look after her for the night. I said, ‘let’s cross to the shady (i.e.: cool) side of the street.’ (Again, we’re in a heat wave situation here, which didn’t make things any easier.) 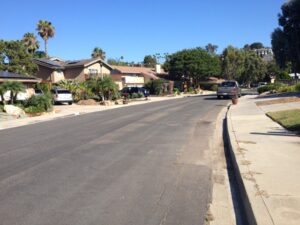 As we were crossing the street, the dog came up to me but I didn’t notice. Michael said, “She’s trying to get your attention.” I told her, “I”m sorry, sweetie, we’re going to find your mommy and daddy.” All of a sudden, we saw a woman, in a half frantic, half “are my eyes seeing what I think I’m seeing’ state, coming towards us. She called out something, but neither of us heard what she said. Our hearts skipped a beat. All at once, the both of us called out, “Do you know this dog???” She came running over and said, “Yes! She’s my daughter’s dog! We’ve been driving around looking for her for hours!”

She ran in the house to get her daughter, who was visiting from Orange County (40-50 miles away.) The sense of relief on everybody’s part was palpable. Not the least of which, my cats. “Sadie” was safely home with her people and all was right with the world.

Why, now, did I find this story interesting enough to write a blog post on it? I’ve found and reunited animals many times, even ones seemingly through divine intervention, but none to the extent of this. Let’s summarize:

• Sadie walked straight up to our door as if she had lived here for years.

• She got into our car and related to us as if she knew us from birth. (These two things alone helped us understand that there was no question this was a ‘meant to be situation’)

• We asked Siri to connect us to Rancho Coastal, but she couldn’t understand us. I resolved to have the vets call the minute we got there to have them stay open for us, just in case, but forgot, even though I said I would do so, not two minutes before walking in.

• If we had not turned the direction we turned, met the people we met, been given the ‘tips’ we had been given to turn around, talked to the people we talked to for a specific amount of time, and then turned down a street that my husband didn’t even understand going down at that specific moment we would have missed this woman. 2 minutes either way and we would have missed her seeing us walking down the street with Sadie. She was about to get into her car to drive around again, and the way the houses are situated, with no windows looking out on the street, there’s no way her daughter would have seen us pass by.

• Sadie (my grandmother’s namesake, who we had spent a day searching for the day before) had her guardian angels working overtime today.

• My spirit guides worked overtime hearing my request for assistance.

• And coming back around to Sadie just walking up to the screen door as if she knew us, as if she had been told exactly where to go and who to trust, is the defining image I will have in my mind. I’ve never seen anything like it, when I walked out the door, she, without a collar, just walked with me into the back yard as if it were hers. 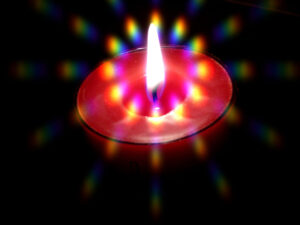 We were suppose to get a visitor tonight. Sadie was suppose to find the two people who she knew would not, could not, ignore or shoo her, but resolve to do whatever it took to find her people and get her home safely. Mission accomplished. All is right with the world. Thank you Sadie for bringing your energy into our lives, thank you spirit guides for helping us find her people, to the minute, and thank you Sadie’s guardian angels for sending her to a home of love and commitment to animals. And, sure, while we’re at it, thank you Grandma Sadie. I never knew you, but somehow it feels like this was a little shoutout from the other side.

The moral of this story is twofold: Trust your instincts to understand when you are the vehicle for divine intervention, no matter how inconvenient it may be for you at the time. There just may be a lost soul that you are intended to help. Secondly, make sure to chip your animals, and if they are chipped, make sure that the information is up-to-date. The amount of agony that will save on everybody’s part will be immeasurable.