I met this very special kangaroo once and I’d love to share his story with you.

We lived on the edge of state forest and always had alot of kangaroos passing through. Most of the neighbours thought them quite a problem with ruining fences ect., but I just took the bottom wires out so they could get under. 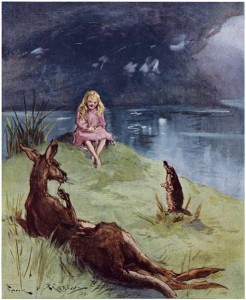 One morning, when I got up to feed the horses, there was this very large male kangaroo in the float turn around area just near the house. They didn’t usually come this close to the house, so I wasn’t expecting to nearly run right into one. He stopped me dead in my tracks as he was so big – about 7ft when he stood up. I just looked at him and he just looked at me. I could see he was an old bloke, and had hurt his hip at somes stage, as well. I was well within range of him doing some serious damage to me and, even though he was old, he showed me that he could! But he chose not to. I told him he was welcome to stay and went and fed the horses.

He stayed in that area, as it was grassed and had cover. I also brought him out food and water, each day, and we would just look at each other. I felt totally safe with him. He saw onto my soul. I thought that, with care, he might start to put on weight and stay, as he couldn’t go with the rest of the kangaroos because of his old hip injury. I became very attached to him and loved our time together. I cant really explain what went on but we were in the same place and it was good.

Then one night I had a vivid dream. I got up to feed the horses and kangaroo and, as I walked up to him and put his food down, he came very close – looked at me – and put his giant paws around me and hugged me. I felt his boney body as strong as a tree, smelt his pungent odour, and felt his claws in my back. I had never been so embraced as this before. He then stepped back and ate his food. I woke up and thought that he was better, and I couldnt wait for the sun to come up.

As it was light, I went outside, but he wasn’t there. Then I saw him. He had moved out towards the paddocks. His large body still, he had passed on and I just cried. He had said good bye in my dream, and I was so glad for that, I felt so privilaged to be a small part in his life and I’ll never forget him.

SIMPLE THOUGHTS FOR THE DAY Daily Inspiration: Oracle Card for…