As I mentioned in a previous post, I’m currently reading Crossing Over by John Edward. As a student of mediumship, the pearls of wisdom in this book are really a huge help.

Edward was talking to a scientist who was planning on doing some experiments on the accuracy of mediumship. Cautious, and rightfully so, Edward questioned the scientist to determine if he was nothing more than a skeptic trying to debunk the field.

To his surprise, the scientist gave this analogy:

“Michael Jordan is one of the all-time great basketball players.

Do you know what his average accuracy is shooting from the floor? … Around 45 percent. In a good game he might get 60 – 70 percent.

So how can somebody who’s on the average missing more than 50 percent of his shots be a superstar? The answer is that he’s got to be better than everybody else. And just because he misses a lot of shots doesn’t mean you don’t count the ones he’s made. It doesn’t mean you chalk up his dazzling plays to luck.” –Photo courtesy of Steve Lipofsky

So it got me thinking a number of different things.

Confidence
This person was looking for the “Michael Jordan” of mediumship to do the experiment. So where does that leave us other poor slobs ( 😉 ) who are just the average professional players?

Well, what it means is that we, as mediums, can read with confidence. It’s part of the process. The important thing is to get enough right that your sitter fully understands that you have connected with their loved one, and that you have given them the comfort they seek in the process. 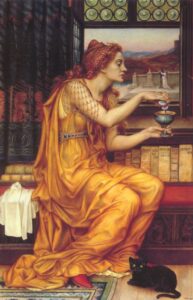 As tarot readers, psychic/mediums, animal communicators, and any other type of telepathic practitioners, we are expected to be 100% accurate, 100% of the time. And, if we are not – which nobody could possibly be – then we are nothing more than charlatans and frauds.

So you have to ask yourself, “Am I buying into the skepticism and dogma?” As a person being read (known to psychics as a ‘sitter’ or a ‘querent,’) do you expect your psychic to be 100/100? As a psychic, do you find yourself sometimes putting that pressure on yourself?

Well, don’t. And I don’t mean, as a sitter, not to expect your psychic to give you good, accurate, helpful information, or as a reader, not to strive for 100% accuracy. What I mean is that you will lose out if your expectations are unrealistic. Don’t throw the baby out with the bathwater. When you get or give really accurate information, accept it for what it is and don’t discredit the ‘hits’ based on the fact that there will be inevitably be ‘misses,’ (ie: information that is either misinterpreted, or not validated for one reason or another.) In doing so, you are doing a great disservice to your yourself, and to the process.

The Dogma
All of this has made me think, once again, about the fact that people believe what they want to believe – or don’t want to believe, for that matter.

I find it really interesting that Christians, or Muslims or Jews, etc., don’t need to defend or explain their belief that something greater than themselves exists. The rest of the world may or may not agree with the form that belief takes, but their faith itself is accepted and they are not called ‘nut jobs’ for believing that there is a big invisible man in the sky or that Noah built an ark and filled it with pairs of every animal, or that Moses actually parted a large body of water.

Now, personally, I have no problem with anyone believing anything they want as long as it works for them, and doesn’t harm other people, animals or the environment. But the irony here is that while organized religion is simply accepted as any given belief system, belief in the afterlife, and in the telepathic/psychic world, is not. It is, in fact, constantly under attack.

But whether people look at what we do as faith or as talent, science it is certainly not. Having done psychic work for many, many years, I feel no need to ‘prove’ my abilities to anyone but myself and my clients, because skeptics aren’t going to believe you no matter how good you are. I do find myself, however, sometimes falling into their trap of expectation. And I’m beginning to realize that the pressure put on individual skills many times speak to the larger issue of defending the belief system itself.

I think what we, as psychics (and those who go to psychics) need to do is fully embrace the “hits.” If the information is accurate, it is accurate, no matter the misses. What we do is hard work. And when you feel yourself falling into that trap of unrealistic expectation, just remember: even Michael Jordan only ‘hits’ 45 percent of the time. 😉

There’s a guy in Salem, Mass., who does some really…

by Lisa Larson I recently had the good fortune to…